Home Ransomware How to remove Unblockupc ransomware and decrypt the files

How to remove Unblockupc ransomware and decrypt the files

In the forefront of ransomware development, yet another hazard has appeared. Its name is UnblockUPC and it successfully utilizes the techniques that its predecessors use. It stealthily enters the systems and start encryption, after which the ransomware displays a notification with demands for decryption. The instructions for obtaining the decryption key are contained within Unblock your files.html, which states that the victim is punished for visiting illegal sites. 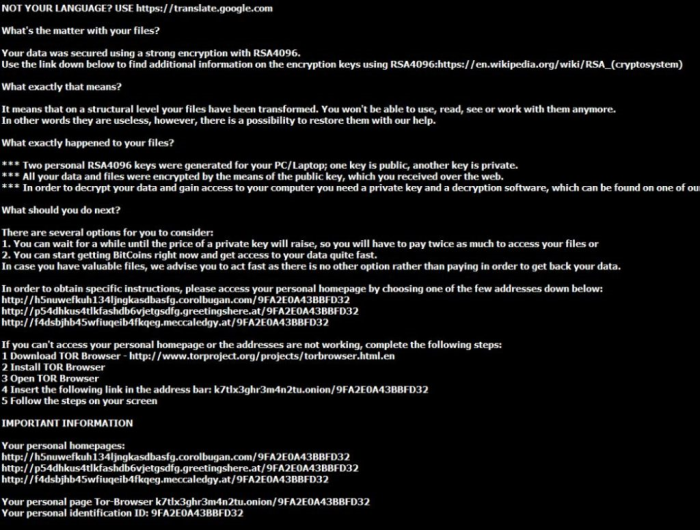 Within the message the cyber criminals leave several sources (unblockupc.xyz, unblockupc.in, moscovravir.ru, http://213.167.243.215, http://185.45.192.17, and unblockupc.club) that a user should visit to retrieve the data. Don’t be taken in by a forgery and avoid those domains, as there is a possibility that these sites distribute other malware. There is no need to fall for this common strategy, as you can try to remove UnblockUPC and decrypt the files on your own.

It’s difficult not to notice ransomware, since it often has one of the processes responsible for displaying a notification message. This window blocks the screen leaving the user minimum alternatives. Besides, some files will be inaccessible, as in many cases ransomware encrypts them to exasperate the scaring effect.

How Unblockupc got installed on your computer

Though it is yet unclear, how the ransomware spreads due to the fact of its recent appearance, some of the victims of UnblockUPC ransomware asserted that just before the malware attack they’ve received a strange email. What unites that letters is that they looked legitimate and had an attachment that user was asked to open. The email was either a bank invoice, or an official governmental letter, or a notification about package delivery. And the opening of attachment instantly initiated the ransomware installation.

What to do if your PC is infected with Unblockupc

As soon as you notice the presence of the ransomware on your system, you should turn your computer off. If it is possible try to create a backup or image of your hard drive info. This may let you to reserve the state of your drives in case a decryption method would be created afterwards.

To make sure that the adware won’t reappear, you need to delete Unblockupc completely. For this you need to remove the files and registry entries of the ransomware. We should warn you that performing some of the steps may require above-average skills, so if you don’t feel experienced enough, you may apply to automatic removal tool.

Performing an antimalware scan with Norton would automatically search out and delete all elements related to Unblockupc. It is not only the easiest way to eliminate Unblockupc, but also the safest and the most assuring one.

For Windows 7 and Vista:

Now you will be able to reach the needed functions and files. For eliminating the ransomware activity, you need to find all of the following items and delete them.

Restore the files encrypted by Unblockupc

Use the decrypting tool

Unfortunately, currently a tool able to decrypt the files infected by Unblockupc is not released yet. You may try applying to the methods described below, however, they might not work with the latest versions of Unblockupc.

Roll the files back to the previous version

If the above-mentioned methods didn’t help in eliminating the threat, then it’s better to rely on an automatic way of deleting Unblockupc. Download Norton

We also recommend to download and use Norton to scan the system after Unblockupc removal to make sure that it is completely gone. The antimalware application will detect any vicious components left among system files and registry entries that can recover Unblockupc.